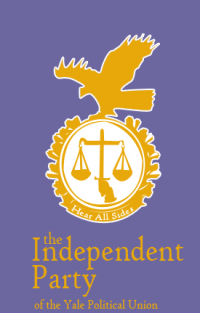 The Independent Party of the Yale Political Union is the premier forum for free and authentic student debate at Yale. One of the founding parties of the Yale Political Union, the IP is easily the Union’s largest party and the only one that adheres to no specific ideology or political viewpoint; instead we aim to foster robust, open, and wide-ranging political discourse.

Our weekly debates are open to the entire Yale community and address challenging political, cultural, and philosophical issues. Our debate format is easily accessible and relies on Robert’s Rules of Order to ensure that all voices are heard and respected. We encourage everyone–the casual visitor and committed member alike–to ask tough questions, give speeches, and actively explore their own convictions. Recently, we have debated some of the following resolutions: Resolved: Kill the Death Penalty; Resolved: Hypocrisy is Not Immoral; Resolved: WikiLeaks is Good for America; Resolved: Go West, Young Man; and Resolved: Defund the Arts

The Independent Party’s motto is “Hear All Sides,” and this is an imperative by which we live. At our debates, you will find bold expressions of opinions from across the political spectrum. One could say that the IP is home to libertarians, socialists, neo-conservatives, hard-line moderates, and almost everything in between–but in fact, we are a group of students who resist the claustrophobic categories of “liberal” and “conservative” popular in today’s politics and reject the partisan pressures that demand adherence to a mass-produced political platform, in favor of intellectually honest and authentic approaches to forming and evaluating our worldviews. In the Independent Party we believe that openness of mind is the truest mark of genuine intelligence.

Along with our debates, the Independent Party hosts a wide variety of social events throughout the academic year. Whether watching a movie, arguing over drinks, or toasting at Mory’s, IPsters are always having fun together. As we like to say, we take our ideas seriously, but we don’t take ourselves too seriously. The IP is one of the closest groups of friends you will find at Yale; the friendships formed in the IP stay with us forever.

“Yale,” George Pierson famously said, “is at once a tradition, a company of scholars, a society of friends.” The Independent Party is much the same. Please join us at one of our debates this Fall and learn firsthand what this party is all about.